Create an Account - Increase your productivity, customize your experience, and engage in information you care about.

To promote the best possible quality of life for the residents of Upper Moreland Township through commitment to local government which is responsive to the health, safety, and general welfare needs of the community and dedicated to providing municipal services which meet those needs in an efficient and caring manner. 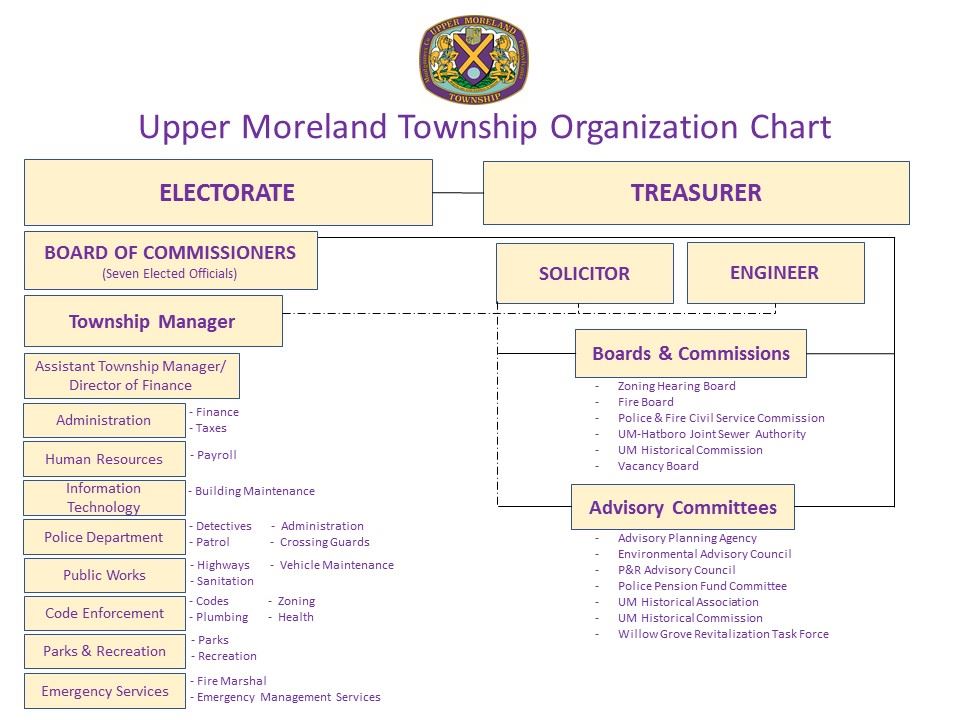 Upper Moreland Township occupies an area of 7.5 square miles in the northeastern corner of Montgomery County, Pennsylvania. The 2010 census reported a total population of 24,015. Upper Moreland is part of the Philadelphia Metropolitan Area and is approximately 15 miles north of downtown Philadelphia. The Township is bordered by the Montgomery County communities of Hatboro, Upper Dublin, Abington, Bryn Athyn, and Lower Moreland while Bucks County lies to the north.

William Penn presented the tract of land including present day Upper Moreland to Nicholas More in 1682. At the time, the area was referred to as the “Manor of Mooreland.” Moreland Township was first used to describe the tract in the 18th century but the present day boundaries were not fixed until 1916 when a line was drawn through the valley of the Pennypack Creek and two municipalities were created: Upper and Lower Moreland Townships. In 1930, Upper Moreland was formally organized as a Township of the First Class and its governmental structure and powers are derived from the laws of the Commonwealth of Pennsylvania. Upper Moreland’s seven member governing body, the Board of Commissioners, is comprised of representatives elected from each of the Township’s seven wards to serve a four year term. The daily operations of the municipality are administered by the Township Manager, Assistant Township Manager and Director of Finance, Chief of Police, Director of Public Works, Director of Parks and Recreation, Director of Code Enforcement, Director of Human Resources, Director of Information Technology and Facilities, Fire Marshal and Emergency Management Coordinator. These positions, as well as the Township Solicitor and Township Engineer, are appointed by the Board of Commissioners.

Upper Moreland is primarily a residential community with distinctive neighborhoods that are complemented by several thriving business, industrial, and commercial districts. Major highways serving the Township include the Pennsylvania Turnpike, with the Willow Grove Interchange located in Upper Moreland, and Route 611, which links the area with Doylestown to the north and Philadelphia to the south. Other roadways of note are York Road (Route 263), Moreland Road (Route 63), County Line Road, Davisville Road, and Blair Mill Road. Commuter rail and bus services to the Township are provided by the Southeastern Pennsylvania Transportation Authority (SEPTA).